Skip to main content
We recently released a new version of our software! Please have a look into our release notes for more details.

After reading this, you can design the setup of the Middleware components and decide how to integrate them into your environment.

The scenarios in this general part will not cover all the aspects that you, as a PosDealer, can cover with fiskaltrust.Middleware and our products. Please check the country-specific notes for further details. Unfortunately, not all scenarios are available in every country for technical or legal reasons.

Please not our terminology for the terms used in our application and this documentation.

Pros and cons describe the scenarios. The term POS-System fails means that the Queue will switch into a failure mode but is still operational until you, as a PosDealer or PosOperator, restore the connection by a zero receipt.

Please note that SCUs are virtual entities in countries where software-only signing is permitted. Virtual entities mean that in these countries, the Queue uses the SCUs certificate directly to sign receipts. Therefore, you do not have to host SCUs separately.

This solution currently only applies to the Middleware for France, so you as a french PosDealer can ignore the SCU parts in the diagrams below.

One SCU for each POS-System​

A single SCU for each POS-System is the simplest - and often the most reliable - architectural approach and works best for independent, standalone POS systems.

One SCU at server for multiple POS-Systems​

By placing a single SCU in a separate CashBox and providing access from multiple queues/POS systems, you create a more efficient solution for networked systems, such as in stores with various POS systems and an on-site back office.

One SCU in the main POS-System, used by other POS-Systems​

Hosting a single SCU for multiple Queues in the CashBox of the main POS-System can be a more efficient solution for interconnected systems, e.g., in stores with various POS-Systems and no on-site back office. 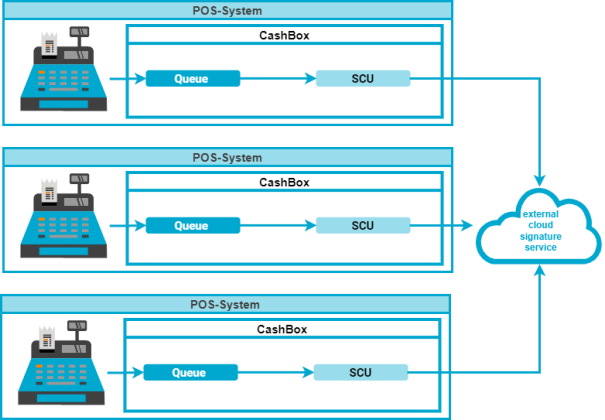 This setup is only available with cloud signing in Austria or when using the fiskaly cloud TSS in Germany.

You, as a PosDealer, can recommend this scenario for interconnected POS-Systems. In this scenario, you connect terminals with no standalone functionality to a central system. 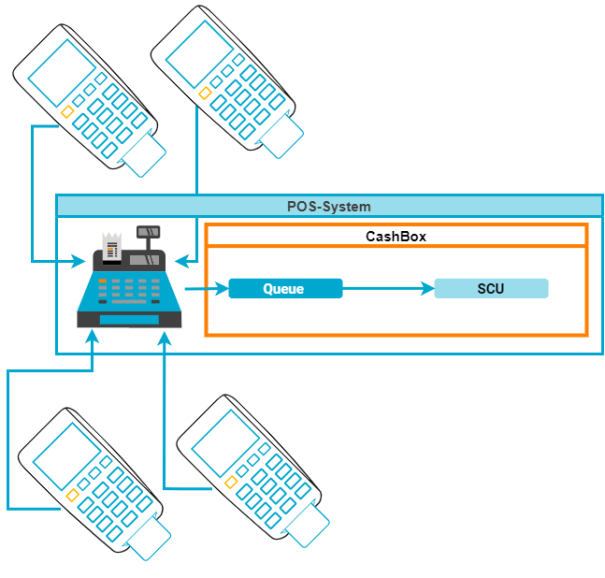 Our partners' experiences showed that in exceptional cases, terminals become defective and, e.g., repeatedly send a broken receipt. If this happens at a high frequency, this could block the shared Queue. You can achieve excellent reliability by creating a separate queue for each terminal and, e.g., hosting all of them in the same CasHbox, as shown in the following diagram. 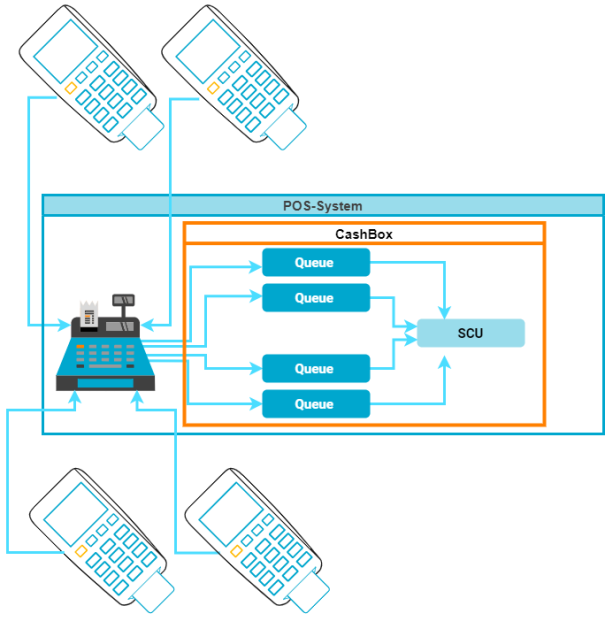 This scenario works best in centralized system architectures. You connect many POS Systems or terminals to the hosted version of the fiskaltrust.Middleware. The Middleware operates either in the user's data center or our cloud (a SaaS product called SignatureCloud). This solution is recommended in countries where remote signing is allowed (Austria and France), as it does not require any locally installed Middleware instances. 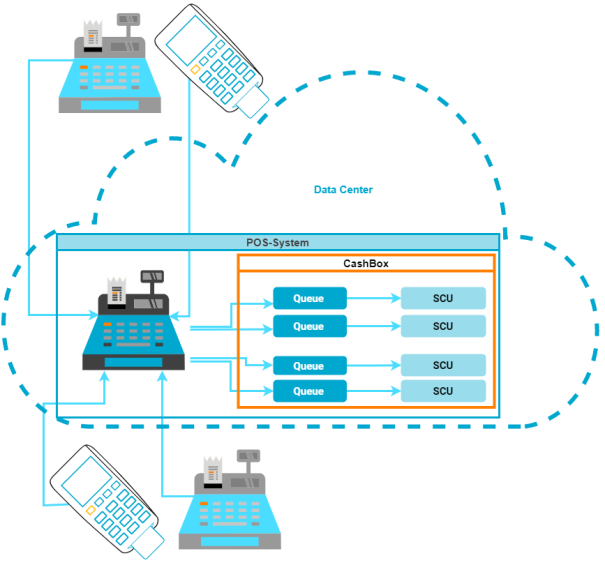