In this Middleware version, we've removed the one-client-limitation of our Swissbit Cloud SCU in cases where it has been bought as a part of our Carefree package. This enables our partners to get the "fully unlimited" Carefree experience with this TSE-as-a-service, as only our fair use regulations are in place now. Additionally, we've updated third party dependencies, fixed some issues in our SCUs, and added requested features and stability improvements to the Middleware for Android.

If the Swissbit Cloud TSE is bought as part of our carefree package, it's now possible to connect multiple Queues to a single SCU (i.e. to a single TSE). This effectively removes the previous limitation to a single client, supporting a broader variety of rollout scenarios and setups, and therefore enabling the full feature-set of our fiskaltrust.Carefree package.

This change also applies when using the SCU with a TSE that was not bought via fiskaltrust - altough in that case, additional costs may be billed from Swissbit for each registered client (which is not the case when using the TSE-as-a-service).

Please note that the one-client-limitation is still in place when buying the Swissbit Cloud TSE as a single product via our shop. Only TSEs-as-a-service, which are included into our Carefree packages, can be operated on an outlet-based pricing model.

You can find more details about this change in our blog.

The Middleware for Android now displays the currently installed version directly in the Main activity (i.e. the view that is displayed when the App is started via its icon). 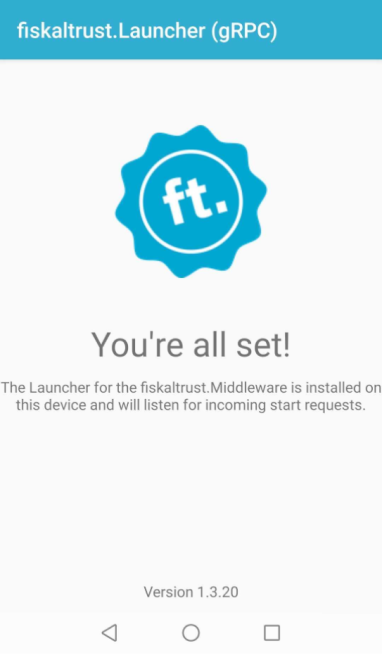 We've added the option to include a "Stop service" button into the Middleware's Android notification. This could be helpful in cases where the Middleware is switched to a non-responsive state, e.g. due to rare power saving behaviors of some devices.

These updates enable our users to benefit from bug fixes and improvements the TSE vendors implemented in the new versions. The regular Middleware behavior was not affected by those.

Please note: A-Trust is currently working on their TSE cockpit. Meanwhile, please use the username and password that are described in the A-Trust partner center.

While the field TSE_VORGANGSDATEN in the transactions_tse.csv table is marked as optional in the DSFinV-K specification, it is used to verify the signatures created by the TSE by some third-party tools. Hence, when not including this data, these checks could fail. We've therefore added the data to the table to ensure that our exports can be properly verified.

These changes are backward-compatible; new exports of existing data will include the changed field.

We've fixed an issue with specific versions of the Diebold Nixdorf TSE's firmware that led to an error when trying to initialize the TSE, stating that the GetSlotInfo message returned incomplete data.

* An RC version was released to verify that some debug logging improvements we made are complete. After ensuring the expected behavior with our partners, the versions will be re-labeled to non-RC.

** Unlike regular package updates, this change requires a re-download of the Launcher from the Portal. The fiskaltrust.Launcher is currently not able to update itself.

We will continue to improve the stability of our Middleware in the next sprints. As always, we're happy to hear feedback and suggestions via feedback+middleware@fiskaltrust.cloud or directly via issues in our GitHub repositories.